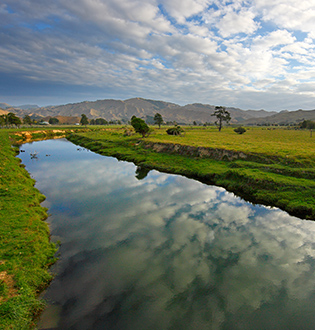 Over recent years, public concern has grown about the quality of the water in many of New Zealand’s rivers and streams, lakes, wetlands, estuaries, and aquifers. For Māori, this concern is very strong, because the relationship with particular awa and roto is central to identity.

In November 2013, the Parliamentary Commissioner for the Environment released a report titled Water quality in New Zealand: Land use change and nutrient pollution. The report followed an investigation into the relationship between land use and two nutrient pollutants – nitrogen and phosphorus. On land, nitrogen and phosphorus are valuable nutrients, but in water they can cause excessive growth of weeds, slime and algae.

This is an update to the 2013 report. It summarises reactions to the original report and presents new information on land use that was not available in 2013. Recent changes in farm productivity and mitigation are described, and trends in nutrient concentrations and water quality are presented.