Update report – Evaluating the use of 1080 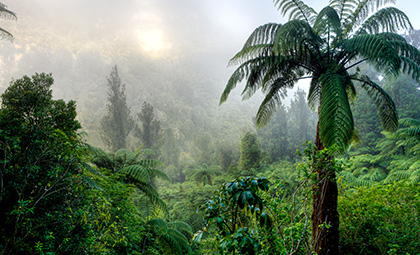 In June 2011 the Parliamentary Commissioner for the Environment released a report entitled Evaluating the use of 1080: Predators, poisons and silent forests. The aim of the investigation was to undertake an independent and rigorous assessment of the controversial pesticide 1080.

With the exception of two species of bats, New Zealand has no native land mammals. For 65 million years our plants, birds and other animals evolved in isolation, protected by the oceans from mammalian predators like rats. In such remoteness diversity flourished, and many of our 90,000 native species are found nowhere else. But they have evolved with few defences against some of the mammals that arrived with human settlement.

For instance, the enemy of kakapo was the now-extinct Haast eagle. To protect itself against this terrifying predator that would swoop down from above, a kakapo would freeze with its feathers acting as a perfect camouflage against the forest floor. Today a less effective defence mechanism against stoats is hard to imagine.

Today New Zealand has one of the highest extinction rates in the world due largely to introduced pests both plants and animals. Three animal pests are especially damaging – possums rats and stoats devastate our forests and the creatures that live in them. It is not as is often thought enough just to kill possums. If the possum population falls there is more food for rats. As rats increase in number they provide more food for stoats and stoats are devastatingly effective predators of our native birds.

Although it was originally introduced to kill rabbits and stop them destroying pasture the pesticide 1080 is now mainly used to kill mammal pests for two reasons – to protect our native plants and animals and to protect dairy herds against bovine tuberculosis.

Despite various reviews a considerable body of research and many regulatory controls on its application the aerial use of 1080 remains contentious especially in some parts of the country.