How much forestry would be needed to offset warming from agricultural methane?

New Zealand’s emissions reduction targets for 2050 were enshrined in legislation in 2019. In this note, the Commissioner questions the rationale behind having a net target for long-lived greenhouse gases and a gross target for biogenic methane.

Why should emitters of carbon dioxide in the fossil fuel-based economy have access to New Zealand’s limited supply of forestry offsets to assist them in meeting their emissions reduction target, but not emitters of livestock methane in the land-based economy?

Forests remove carbon dioxide from the atmosphere, not methane. But if forest offsetting works by creating a cooling effect to compensate for warming from emissions occurring elsewhere, then it should be possible – at least in theory – to use forestry to offset the warming from any greenhouse gas. This includes biogenic methane produced from plant or animal sources.

To test the feasibility of this idea, Professor Dave Frame and Dr Nathanael Melia were commissioned to calculate what area of forest would be required to achieve roughly the same change in temperature as reducing a herd of livestock by one animal. 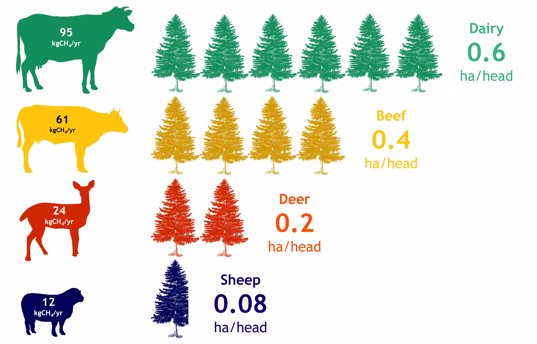 Figure: How many hectares of pine plantation forest you’d need to plant to achieve the same temperature effect as reducing a herd by one animal.

At the national level, planting around 770,000 hectares of pine plantation forest between now and 2050 achieves a similar change in temperature as reducing methane emissions from the national dairy, sheep, beef and deer herds by 10% over the same time period.

This means that very large areas of forest would need to be planted to make any significant dent in the warming effect of New Zealand’s agricultural methane emissions. Clearly, reductions in gross methane emissions will be essential to do that. But using forestry to offset a fraction of the warming might also be possible.

The existing architecture of the Climate Change Response Act 2002 does not allow forestry offsets to be counted towards the national targets for biogenic methane, so changes to the architecture of the Act would be required if this were to be considered.

This note contains no recommendations. The aim of the Commissioner is simply to lay out what can and cannot be credibly claimed with respect to offsetting methane from livestock, in the hope it will help foster a better-informed debate should New Zealand’s 2050 target for biogenic methane be reviewed in future.